First official concert after a while on the beautiful terrace of
Haus der Kulturen der Welt, Berlin!
Kitty Solaris “Easy” Single Release on the same day!

+++
Kitty Solaris
Kitty Solaris makes disco grooves and wave harmonies with pop structures vibrate like nobody else in Berlin’s indie scene. In the past decade and a half, she’s not only made her mark on it as a musician. In addition to the Lofi Lounge concert series, she has also been operating her own Solaris Empire label since 2007. “I don’t need your prayers / I can help myself,” she encapsulated this strict DIY approach in Money Back from her last album, which will be followed by the LP Sunglasses this year.

Derya Yıldırım
Derya Yıldırım studied piano, guitar, oud, saxophone and bağlama from an early age and uses all these means to reinterpret traditional Turkish poetry and music, leading them into the future without losing an awareness of their past. While she’s done so with a full band behind her – as on her recent debut album Kar Yağar in a symbiosis of traditional forms with traces of psychedelia, jazz, and funk – in her solo work she is devoted to Anatolian folk music.
+++ 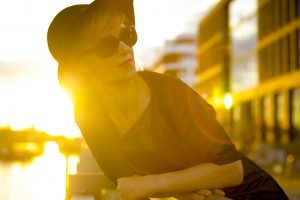